Thank you to Barry Nisill for the insight into Canada’s industries and the Belzona activities there.

Canada routinely tops tables for being one of the most picturesque countries in the world. It’s a nation rich in natural beauty, with vast forests, impressive lakes, enormous mountains and the world’s longest coastline.

It tops tables with Belzona too, as this same landscape has attracted many industries over the years, along with the associated machinery and equipment. Historically, three of the most important businesses have been: logging, petroleum extraction and ore mining. As for the buildings and structures sector, Canada’s variable and extreme weather often means long-term protection is necessary.

For Belzona, this wealth of different opportunities around Canada has resulted in the opening of a Corporate Office alongside the partnership with five Distributorships, Belzona British Colombia, Belzona Great Lakes, Belzona Western, Belzona Quebec and Belzona Atlantic, each of whom has developed an expertise in their local area.

But over the past decade Canada’s economy has been undergoing a shift and some of the once-dominant industries are no longer seeing the same popularity. On the Belzona Blog’s second stop in the ‘Around the World in 8 Blog Posts’ series, we will be visiting this prolific country and exploring the changes it is currently seeing. 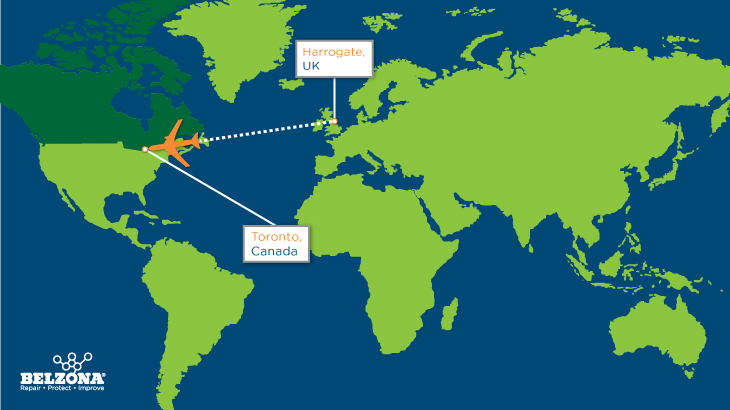 On an economic scale, Canada stands out as a nation as being wealthy (with the 15th most advanced economy in the world and as a member of G7), yet also for having a rather unique economic climate.

This is because of the large importance of the primary sector in the country. It is a sector usually associated with less-developed nations as it relies on resource-based industries such as agriculture, forestry, fishing and mining. In the past, Canada’s vast and varied landscape made this possible and, in 2009, these industries accounted for 58% of the country’s exports. However, as stated, these days the country’s economy is changing.

An example of this is how the logging business, an integral part of the Canadian Pulp and Paper industry, is facing increasingly difficult times. According to Barry Nisill, former Belzona Distributor in Ontario and now Belzona Vice-President: “Pulp and Paper has been declining in Canada. However, Belzona still completes many applications in this sector. The most common application we do is positive grip application to transfer rollers, speed up wheels, lug loaders and stackers.”

Other primary sector industries which may appear to be experiencing a fall in demand are still a steady market for Belzona materials. Barry notes, “Heavy and primary processing industries, such as mining and power generation, continue to be important as they operate processes that are abrasive, erosive, corrosive and damaging and are continually looking for solutions.” After all, Canada is still a world leader in the extraction and production of many minerals and substances such as gold, nickel, uranium, diamonds and lead. These mining environments benefit significantly from the introduction of Belzona materials to their machinery and equipment.

On the other hand, there are many industries which are performing well in Canada. Some of the biggest being:

Perhaps the most exciting of these is the is the growth of the Renewable Energy industry. Barry partly accredits this to political changes over the past few years which have promoted the reduction of fossil fuel consumption. He noted how: “Canada has always been environmentally friendly. In 2014, the province of Ontario became the first province/state to stop burning coal for power generation. Initiatives like this have meant Canada has become a global leader in the development of nuclear and renewable technology especially, hydroelectric power which continues to grow.”

Renewable Energy is becoming more of a global focus and Canada is one of the nations leading the way. Belzona are helping the industry’s growth, as the company’s versatile product range can be used to counter many of the different problems faced by the relatively new equipment and machinery in different renewable energy power stations.

As well as these industries, the extremities of Canada’s environment create a whole host of problems affecting building and structures, which Belzona is more than qualified to address. Barry highlighted some of the issues: “The climate ranges from -40°C (-40°F) in winter to +35°C (-90°F) in the summer, with heavy snow and ice, rain and UV exposure.” Extreme as these may be, the quality of Belzona materials means that a one-time application can result in decades of protection.

One company who decided to use a Belzona material to protect their assets was a theme park operator in Vaughan, Ontario. The carbon steel anchor bolts at the bases of one of their largest attractions were experiencing high levels of corrosion. The bolts were uncoated and, therefore, unprotected from the elements. This posed a significant health and safety risk as, should one of these bases become unstable or wobbly, the whole rollercoaster could be impacted.

It was therefore decided that a Belzona solution would be used to coat all the bolts. Belzona 5831 was chosen as it is an anti-corrosion protective coating. Additionally, it bonds effectively to the steel substrate and does not shrink or distort. In total, 1700 bolts were protected to complete the application.

The economic climate may be changing in Canada but Belzona is more than keeping up. As Barry pointed out: “In 2016, the Canadian business had its best year on record. Despite the global economic, political and social issues, Canada has continued to outperform expectations. In each of the previous six years we have seen growth year on year with sales doubling over the last five years.”

With numbers like these it is clear that Canada is not only a beautiful country but a prosperous one too.

Note: It is our responsibility to protect your privacy and we guarantee that your data will be completely confidential.